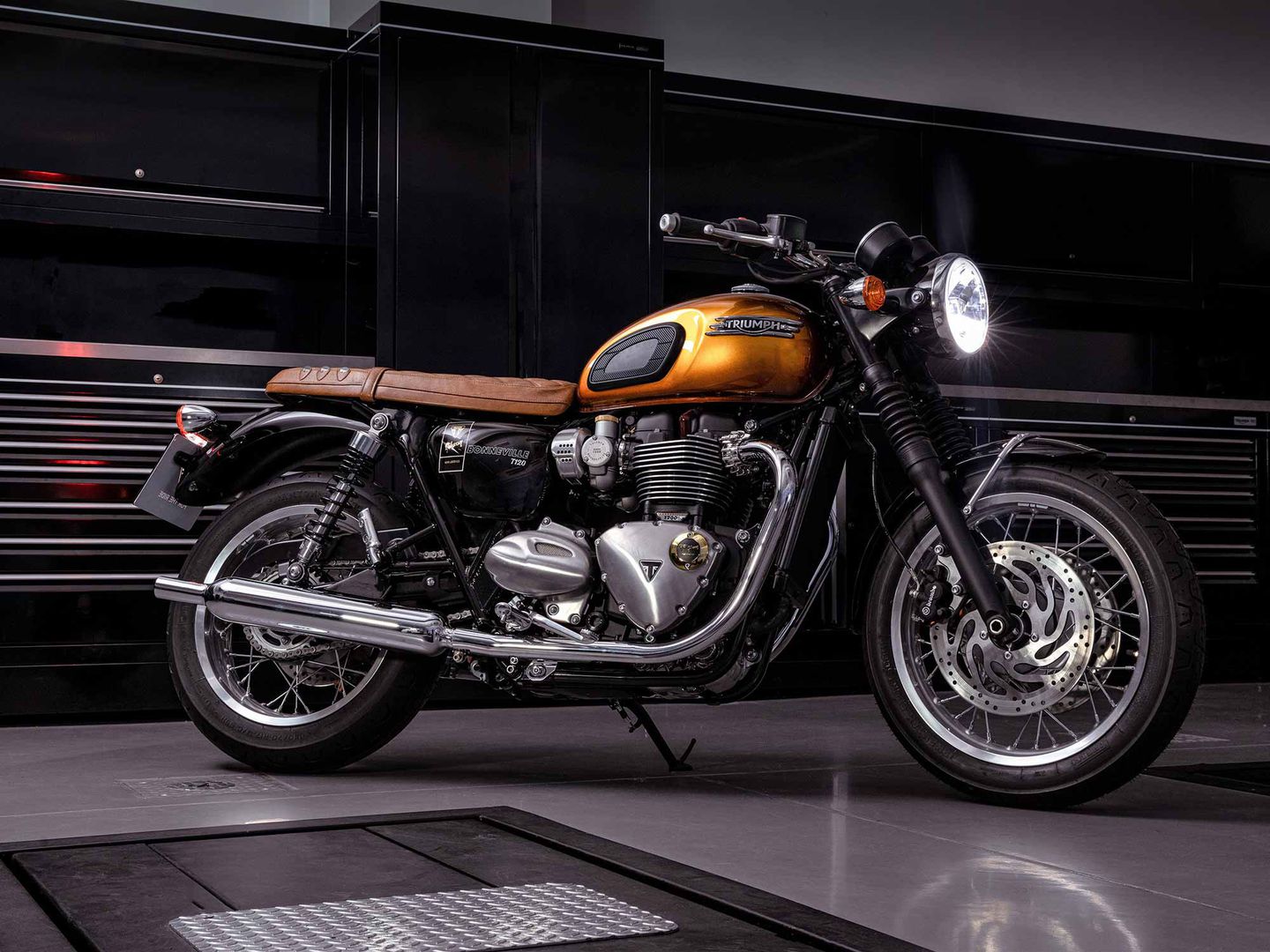 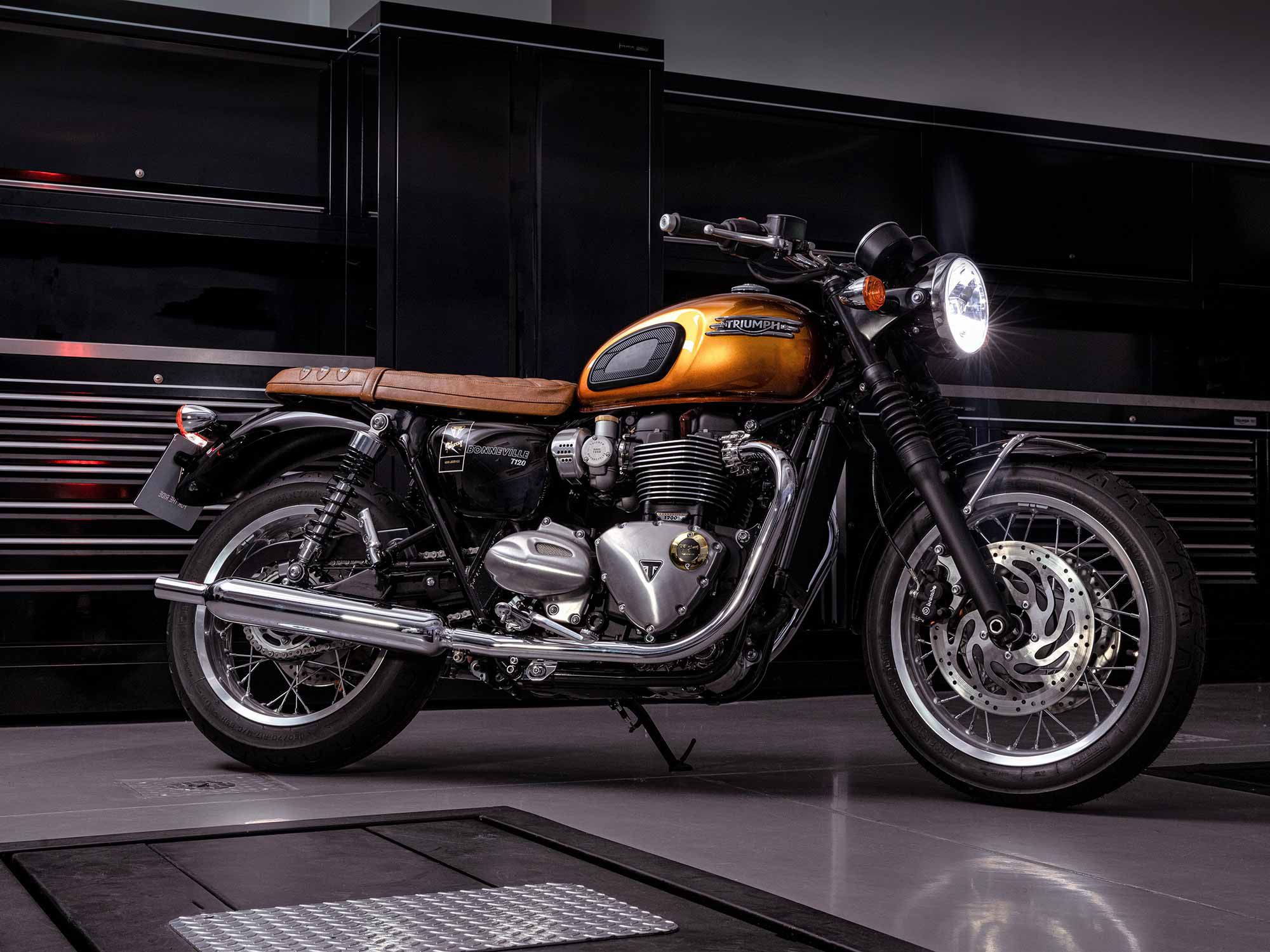 Triumph’s 1959 Legends Custom Edition is built on the current T120 platform and pays homage to the original Bonneville. (Triumph Motorcycles/)

Motorcycles and rock ‘n’ roll have gone together like smoke and fire for more than half a century now, so when two of the most enduring totems of that culture, Triumph Motorcycles and Gibson guitars, recently decided to team up to honor their shared histories while also supporting the global charity efforts of The Distinguished Gentleman’s Ride, some of us wondered what took so dang long.

Triumph has created a one-of-a-kind motorcycle for the occasion, referred to as the Bonneville 1959 Legends Custom Edition. Based on the stock T120 model, the hand-painted custom collaboration celebrates the historic resonance of the year 1959 with two legendary products in each brand’s story—the 1959 Gibson Les Paul Standard and the 1959 Triumph Bonneville T120, two of the most coveted creations of their worlds, and both still available today. On the Gibson side, we get the Les Paul Standard Reissue 1959 Legends Custom Edition.

Related: The Distinguished Gentleman’s Ride Is Back for 2021 The new guitar and motorcycle are based on legendary classics—the 1959 Gibson Les Paul Standard and the 1959 Triumph Bonneville T120—that are both still sold today. (Triumph Motorcycles/)

Triumph’s tribute bike uses the latest generation of the iconic Bonneville as its platform, with a torque-rich 1,200cc parallel-twin engine and all the significant upgrades the series got in 2021. Even though it’s a thoroughly modern motorcycle, you can still see its deep connection to Britain’s original superbike, the legendary 1959 Bonneville T120.

The Legends Custom Edition adds to the mystique and piles on a host of bespoke touches like a unique hand-painted sunburst paint scheme to match the Iced Tea Burst finish of the guitar, as well as a black painted guitar neck and headstock shape, all edged with hand-painted coach lining by Triumph’s custom paint team in the factory workshop. 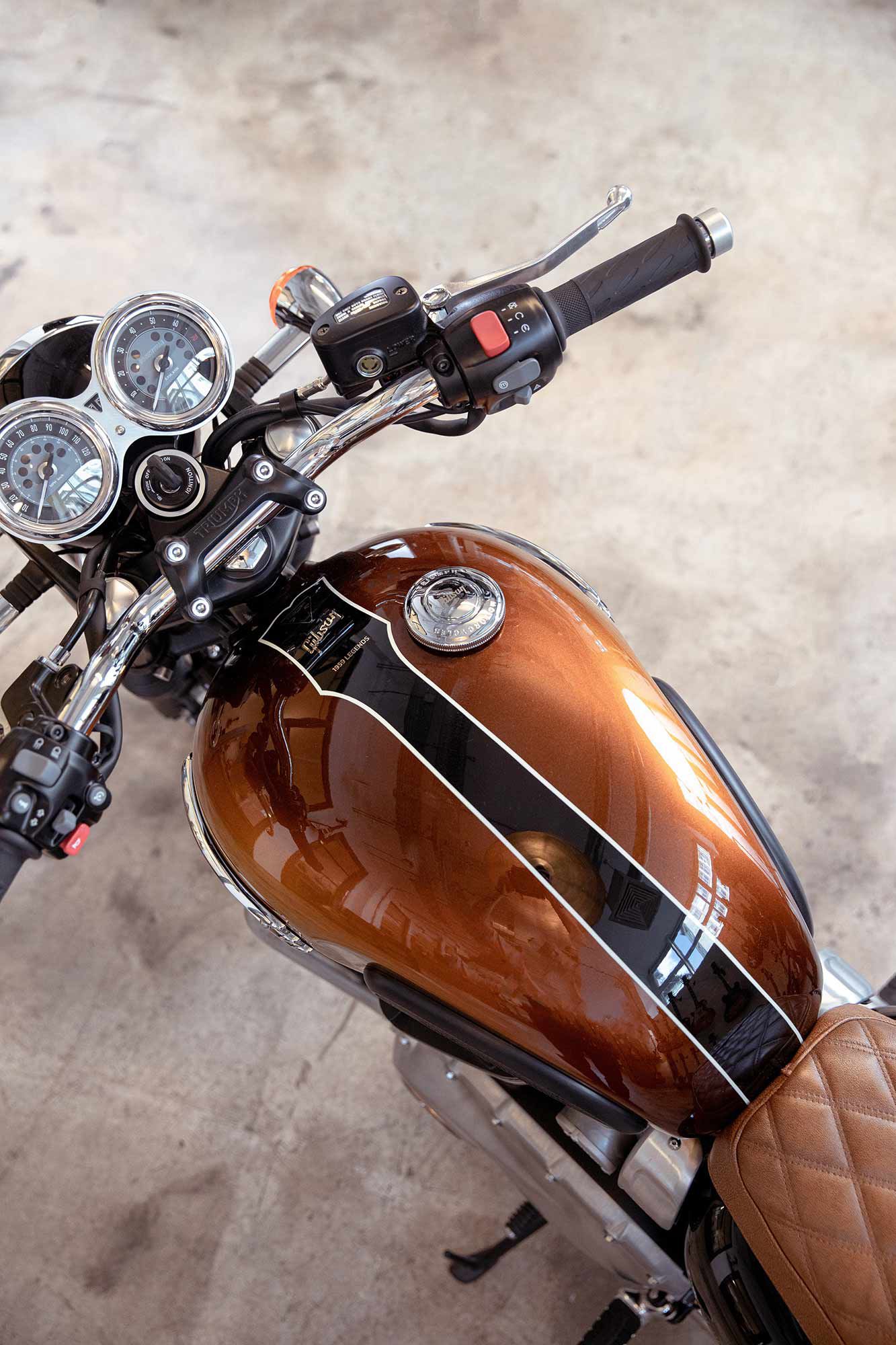 Custom paint mimics the guitar’s burst finish, with a black neck and headstock on the tank as references. (Triumph Motorcycles/)

Then there are the identifying details and graphics which include metallic gold “Triumph Gibson 1959 Legends” badges on the tank, side panels, and front mudguard as well as a fuel filler cap with the Gibson logo.

Down below is a custom, intricately detailed alternator badge with the same 1959 Legends logo, while up top, a custom brown leather seat complete with pick holders and diamond stitching is designed to match the leather guitar case. 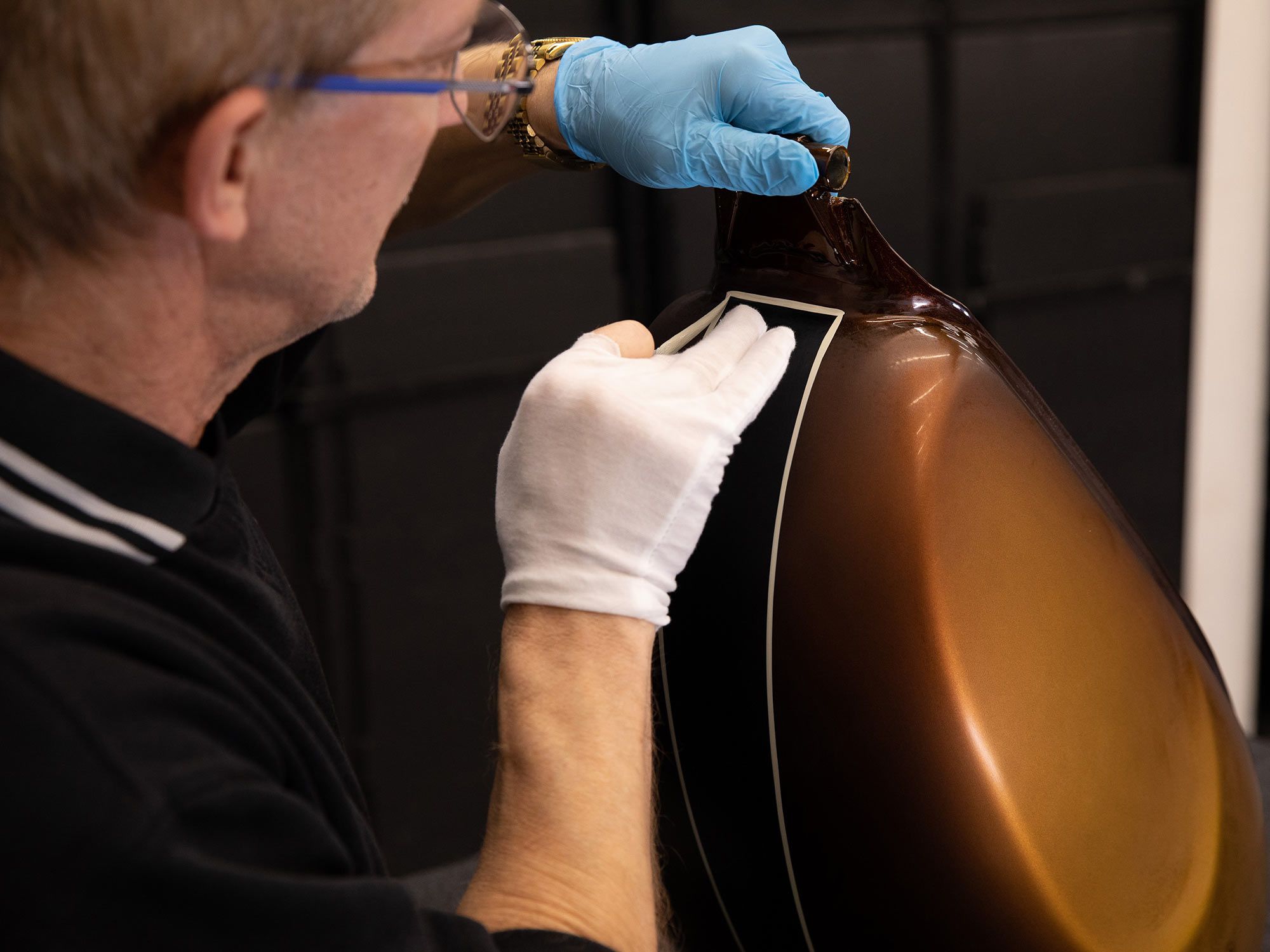 Triumph’s paint pros went to work on the hand-applied coachlines in the factory workshop. (Triumph Motorcycles/)

As for the guitar, no specific Gibson ax carries more intrigue and gravitas than the 1959 Les Paul Standard. The extremely rare Standard (less than 650 were made) has become one of the most iconic in history, shredded by rockers like Jimmy Page, Joe Perry, and Slash.

The new Standard Reissue special edition pays tribute to the original and, according to Gibson, is “an accurate clone that’s authentic in every detail, from its iconic sunburst finish to the look and feel of each part and its incredible trademark tone.” Based on the collectible 1959 Les Paul Standard, the new Reissue aims to replicate every detail, from the look to the tone. (Triumph Motorcycles/)

For more information and to join your local ride, visit gentlemansride.com. 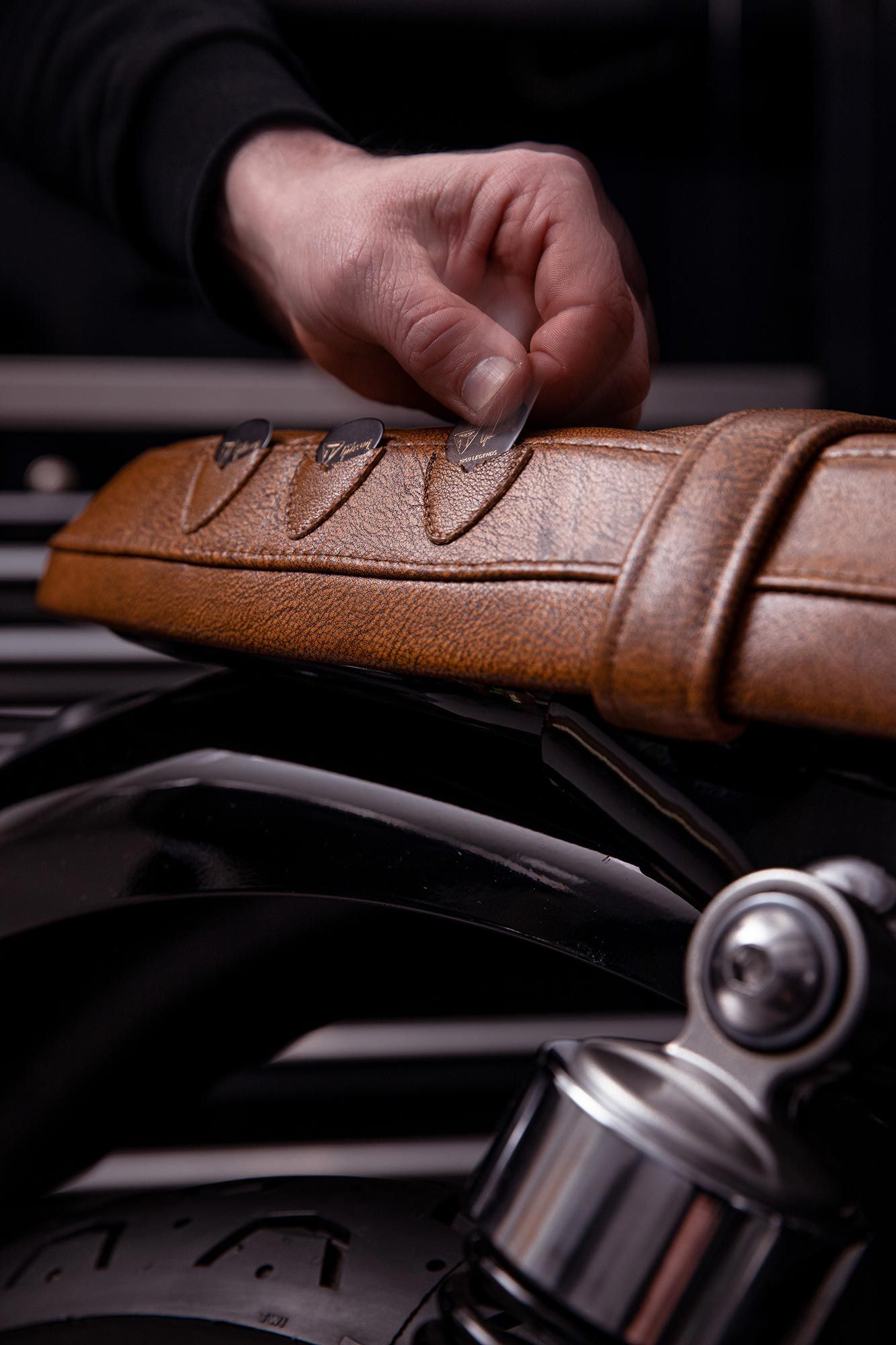 Custom Bonneville’s special brown leather seat even has integrated pick holders, in case you feel like breaking out of the jams at a stoplight. (Triumph Motorcycles/) 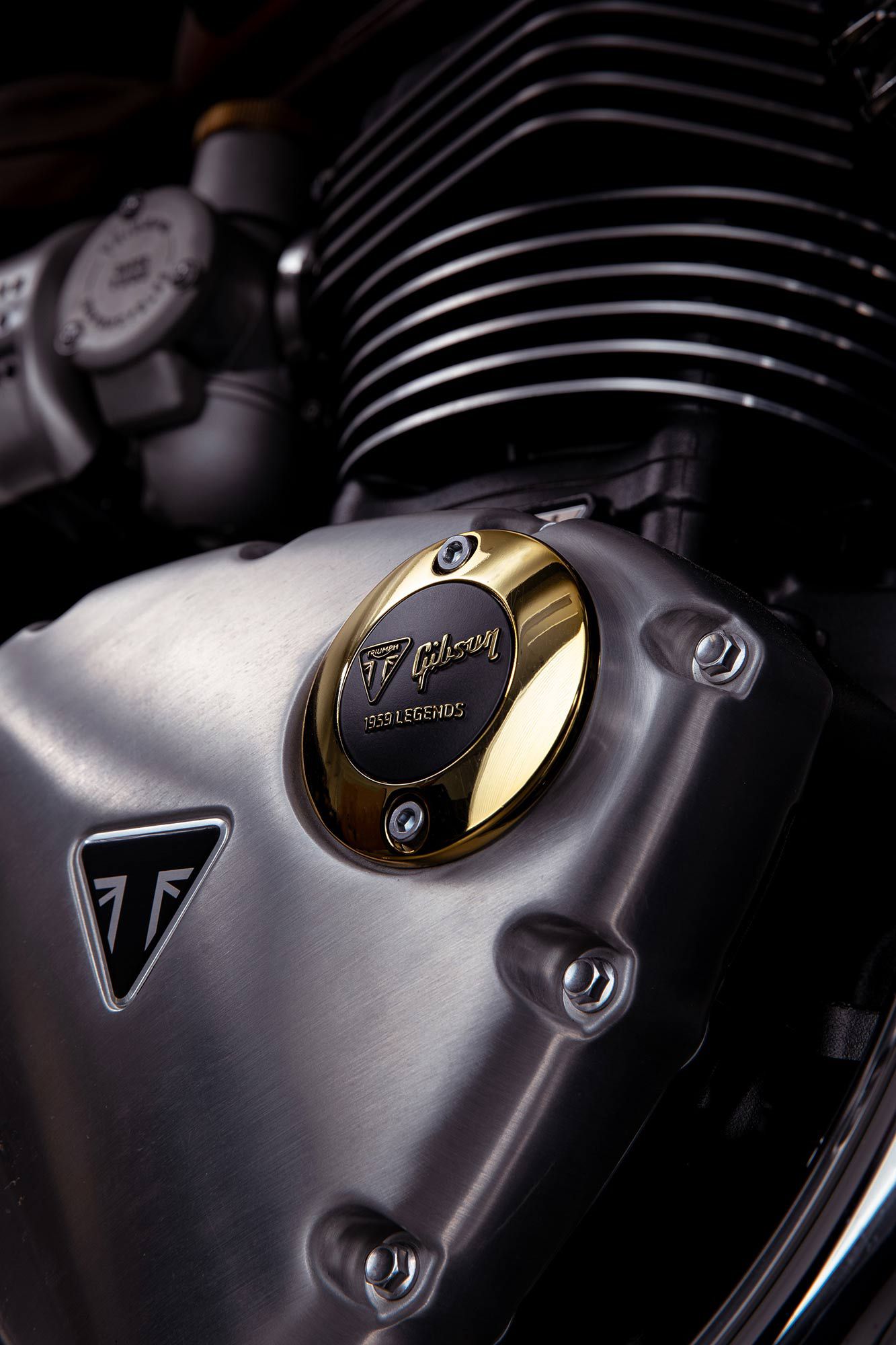 The detailed alternator badge with the 1959 Legends logo. (Triumph Motorcycles/)